Learning and inspiration through new experiences

Colin’s father was into photography and taught him the basics. From the age of 15 he joined the photography club and since then has always enjoyed taking photos and also developing them himself. He was the youngest person at the club which was populated with some incredibly talented photographers who also taught and inspired him at this influential age. However, he found that the more advanced and better they got they seemed to only focus on one niche style. Colin prefer to keep his output more varied and likes to keep trying new techniques and styles.

His motivation is to take more shots, switch around set ups, experiment and learn. Previously he thought that gear and equipment was the answer to getting the photos he wanted – but realised that isn’t the answer to achieving better quality photos. Instead of spending $400 on a new lens, spending that on a course has more impact. This was especially true when he started developing in the studio and practicing more with lighting.

When he started he would watch tutorials of photographers and YouTubers that inspired him. “If you can emulate a great photographer’s approach that works well for you and you can develop it into your own style.”

Inspiration in the new

Colin has only been in Dubai for 2 years. As he lives in the Marina he has some beautiful scenery right on his doorstep, however he finds he took more photos of Dubai when he came here on holiday. He pronounces he is more of a travel photographer. In a new place with new sights, sounds, light and scenery, this is when he is inspired to take his images.

He highlights that the last year has restricted his travel and therefore his output of images. Asked why not therefore take more interest in the available scenery on his doorstep and beyond into the UAE he admits he has other priorities currently with family.

The limitation on travel opportunities during the pandemic is especially obvious at the moment. He points out that many photographers in Dubai are taking shots of the same landmark; everyone seems to be taking the same photo from the same roof or apartment. To achieve the best shot in the best light means there are limited spots – especially when the window of light for that ‘perfect’ shot can sometimes be only 20 minutes. (And Colin is the first to admit he isn’t going to get up at 4am for a photo!) This added restriction and competition means however that really good and creative photographers are upping their standards and producing some excellent images.

Not restricted by style

Colin does not have a specific style – and we at inkopia also find his images quite varied.

He feels that a picture should tell a story. Some of his favourite photos are quite specific; he tries to create a picture rather than just take one.

Sometimes it can take time to set the scene up and get the magic shot. And this is the beauty of finally succeeding, when previous attempts may not have been so successful.

Colin likes to portray scale. He believes that one of his most successful images is of the mosque in Abu Dhabi – you can feel the sheer scale and majesty of the building. Sometimes it’s hard to understand the magnitude of something unless you actually see it in person. A mobile phone cannot capture that, for example with the Burj Khalifa – you can only capture this ‘properly’ in a long telephoto shot with telephoto lens.

5 panoramas stitched together to showcase the magnitude of this beautiful mosque. 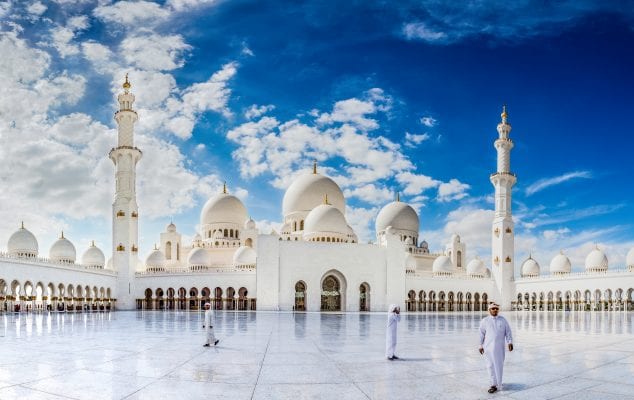 This stunning shot taken in Phoenix Park in Dublin won a photo competition and gained Colin a lot of exposure on local TV in Ireland. “This photo breaks a lot of rules. In theory, there are many elements to improve here, but it works.”

Colin shot this image on honeymoon. The fishermen would sit there for hours a day, sitting on a stick catching sardines. They came up to him afterwards to inform him that there was a fee for taking pictures of them. AED10 each and ten of them to pay!