Lynn Emery is an amateur photographer with a highly distinctive style, a passion for nature and wildlife, and an impressive array of awards. Her awards include:

Lynn is one of our original inkopians and one of the first (along with Sajin Sasidharan) to offer Limited Editions on inkopia.com.

Learning the love of photography

Lynn Emery was born and bred in Newcastle and worked for 13 years as cabin crew for Virgin. During that time, she met Brian, her husband, who worked as an architect. Forced to take leave during the Gulf War that was blocking many flight routes from Britain and around the Middle East region, Lynn joined Brian in Botswana in 1990. It was here, in Africa, that Lynn’s photography story began and her love of wildlife, in particular, started to grow.

The Emerys moved to Dubai in 1997. After 9/11 Lynn took voluntary redundancy from Virgin and started working for Emirates on the ground in 2002.

She spent more and more time with the camera and also took a photo course with GPP. The instructor told her she was a natural and knew what she was doing. “You don’t believe it at first – but more and more people told me I was taking some good shots,” she exclaims.

Lynn started with taking family portraits. She laughs, “Never again! Working with animals is so much better. They don’t tell you what to do and how!”

The beauty of wildlife

Concentrating on wildlife was her passion. With more trips to Africa Lynn was able to spend more time on safari to point her lens across the landscape at the indigenous animal and bird wildlife. Her favourite place is Kenya; the Masai Mara has guaranteed wildlife and the migration is full of activity. She also highlights that South Luangwa in Zambia is not so populated with people but instead has an abundance of hippos, birds, elephants, leopards and more.

Northern Kenya in the Riff valley is where she shot her wonderful flamingo images. They have family friends who have a ranch there and their brother is a pilot. He takes Lynn out when they stay, as he knows how to fly the aircraft over the flamingos at the right time of day for the best light.

“The huge, long shadows in the early evening, just before sunset, are amazing and I can capture a real sense of moodiness.”

In a light aircraft they are able to reach the most remote places. Sometimes they fly right up to the border with Somalia, flying over villages and local tribes with AK47s. Luckily the pilot is recognised, otherwise this could be a precarious situation.

You can tell this is what draws Lynn back to Kenya again and again. The ability to get away from the madding crowd, into the wilderness, away from the safari crowds and to simply be in the middle of nature and all its wild beauty.

Focusing on close up shots and specifically on the features of an animal requires a shorter distance between photographer and wild animal. I ask if she is not fearful? Lynn points out that has spent so much time with the animals and learnt their behaviour through taking their pictures over a long time. She highlights she is consciously aware of what their movements are going to be next.

However, there have been moments when she hasn’t been so lucky.

At Victoria Falls the family were booked onto a sunset cruise to see the hippos. Unfortunately, they arrived to find that they were over booked and instead were offered to go on a little speed boat. One of the hippos had strayed away from the herd and the boat accidentally went over it – naturally, it went crazy. Luckily, they were in a fast boat.

Once, when they were on safari, an elephant came right up to the vehicle. Lynn describes the tension and the fear of everyone around her. But she remained calm throughout. She explains, “Sometimes when you’re behind the lens it’s not real, you don’t feel the tension and danger as much. It was only afterwards when I put the camera down and the silence turned into nervous chatter and my husband was looking extremely anxious that I realised the danger we could have been in.”

During the first lockdown in March / April 2020 Lynn had a quick layover in London. She had a serendipitous opportunity and took it to walkaround London for a few hours.

With her camera in hand, there was nobody around, only some police patrolling the streets. The city felt ‘totally weird and abnormal’. People wonder if she had edited her images of London during the first lockdown, but she explains this away. “In the whole time I wandered along the Embankment to St Paul’s I only saw half a dozen people. I didn’t need to edit people out of the images as they weren’t there in the first place.”

Not knowing the rules but making the most of her short walk Lynn says, “For streets that are usually completely mobbed, it was such an experience.”

She saw a fox in the middle of the street – you’d not normally see that in central London. Lynn also went home to her native Newcastle. Some of the streets that she took shots of have since been dug up and detours put in place – some streets will never look the same again.

Due to travel restrictions in place globally, Lynn currently focuses on the wildlife at Al Qudra. She never thought she would be so attentive on birds, however she is beginning to learn the way they behave and to predict their movements for capturing the best shots to create a sense of atmosphere.

Lynn is happy that lockdown has given the animals ‘the time to get back to nature and do what they normally do’. She explains, “On safaris natural tracks are suddenly blocked by all the tourists in their vehicles. It can feel so sad, but at the moment nobody is there so they are taking back their environment.” 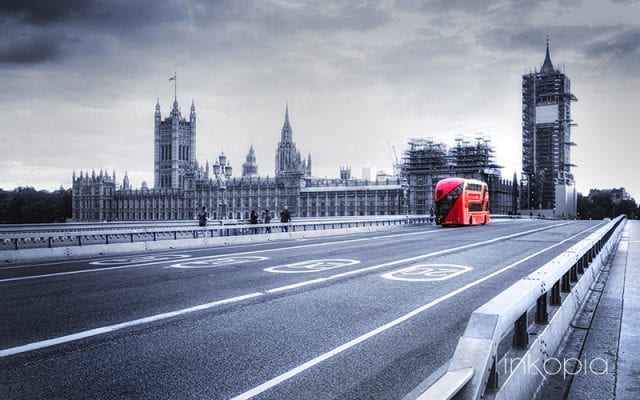 Lynn’s images feel dark and moody and she admits this is intentional. She wants to evolve away from the generalisation of wildlife photography and change the perspective. She edits her animal images to introduce heavy dark backgrounds and enhances the focus to one element.

This image is of his mouth and mane only. The missing part of the photo shows that his eye is ripped apart, but here Lynn has cropped that and focused on the part underneath.

This rhino is such a magnificent beast but you wouldn’t necessarily consider putting a picture of a rhino on your wall.  Lynn believes, “The way I have been more creative with it you would absolutely put this on your wall!”

Focusing on a half face draws you into the specimen rather than if you just had a full picture. Cropping faces instantly generates a sense of intrigue, making you use your imagination to consider what is missing from the image. 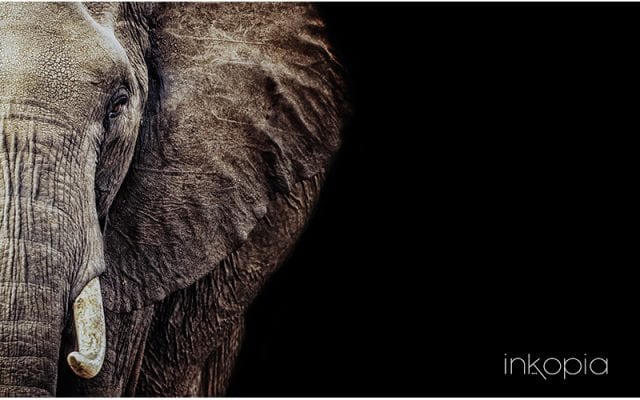 Lynn Emery is exhibiting her ‘Rhino’ and ‘Cheetah’ photographs at the RAK Fine Arts exhibition throughout February 2021.